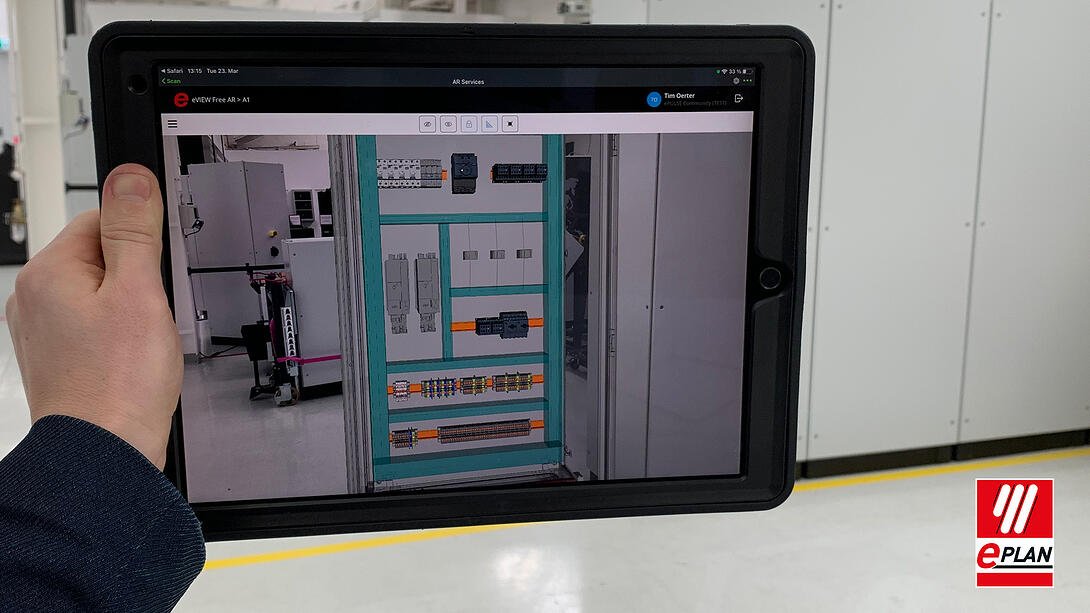 The new AR add-on from EPLAN eVIEW Free brings the digital twin from your EPLAN Pro Panel project to wherever you are through augmented reality. Would you like to try out the new feature on your tablet or smartphone? In this blog we explain how the new add-on works, its technical requirements, plus you can try it out for yourself with the demo project.

Have the digital twin at hand

Imagine if you could take out your smartphone at your next customer appointment and casually project the digital prototype of a control cabinet onto the managing director's desk - that would be cool. This is now possible with the new AR add-on for EPLAN eVIEW Free!

With the free feature, you can share your 3D digital twins which have been created in EPLAN Pro Panel with colleagues and business partners in the cloud via augmented reality (AR) on a smartphone or tablet.

What exactly is augmented reality, anyway?

Augmented Reality makes it possible to overlay the real environment with digital models. In comparison to virtual reality, you don't completely immerse yourself in a virtual world with VR glasses, but project virtual objects into the real world through a smartphone.

For technical use, augmented reality can be used, for example, to view 3D models such as virtual prototypes in one's current working environment in order to obtain additional information easily and clearly.

The EPLAN eVIEW Free AR application can be opened directly in EPLAN Pro Panel (from version 2.9 SP1) via the EPLAN ePULSE cloud environment. Here it is possible to upload 3D digital twins to the cloud and share them with other users within an ePULSE organisation.

A link and a QR code are automatically generated, which can also be forwarded to the desired recipient by email, for example. The QR code can then be scanned via a partner app (Vuforia from PTC) with a tablet or smartphone. After logging in via an ePULSE account, the app automatically connects to EPLAN eVIEW Free AR. Now the 3D control cabinet can be displayed anywhere via the camera of the end device - and can thus be projected onto a desk, for example. And not only that: by clicking components within the control cabinet you can open the 2D view of the circuit diagram at the relevant point, for example for further coordination via redlining and greenlining.

The first steps are also explained in this video that our colleagues from EPLAN Support created:

If you want to share your 3D constructions and make them available for eVIEW Free AR, you'll need at least version 2.9, SP 1 of EPLAN Pro Panel Professional. To use the AR feature on your tablet or smartphone, please install the Vuforia View app from PTC. This is available free of charge for Android and iOS as well as via Microsoft.

The basic requirement is registration for the ePULSE cloud environment via www.epulse.com in order to be able to use the various EPLAN cloud applications. Please note that you will not see EPLAN eVIEW Free AR if you log in via your browser. You open the application via the menu item "Utilities> AR Services" in EPLAN Pro Panel or via the Vuforia app when you scan a QR code.

Test the EPLAN AR feature with a demo

Don't worry if you do not meet the technical requirements as you can now try out the AR function directly with your smartphone or tablet, simply scan the following QR code to open a demo project. However, free registration at www.epulse.com is still required to use the demo.

Tip: The demo is stored in the cloud within the "ePULSE Community" organisation. If you are not a member of this organisation, you can easily join it via your organisation management.

Have fun with the new AR feature!

Recorded Webcast
Tim Oerter, Program Manager Digitalisation at EPLAN, has been overseeing the development of AR solutions since the first showcase for service & maintenance applications was presented.

You can now watch the recording of the webcast "Eplan eView AR feature - Share your Eplan Pro Panel 3D design" where Tim dives into the new feature, showing you how it can be used in various application scenarios.

Ian Greeves Ian has been working at EPLAN UK for a few months as an Applications Engineer. Ian has previously worked in the maintenance department and in the pre-production department, designing and building semi and fully automated machinery. He wants to use his engineering skills and expertise together with EPLAN to enable customers to simulate, validate and optimise their electrical design applications to achieve their goals greeves.i@eplan.co.uk Ian Greeves auf LinkedIn 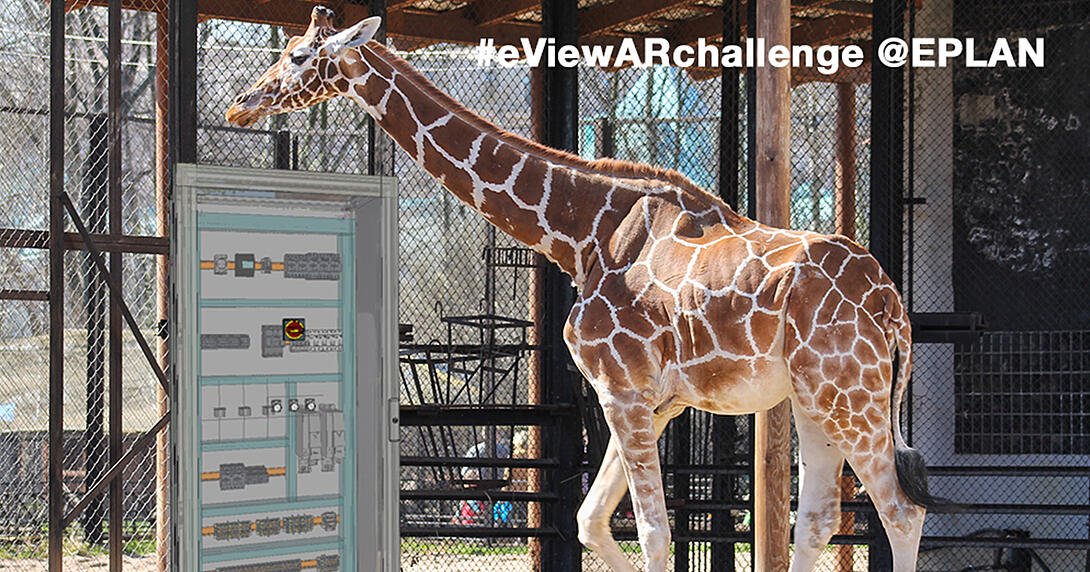 Be part of the #eViewARchallenge on LinkedIn with EPLAN eVIEW Free AR!

How to generate and place QR codes in EPLAN project pages 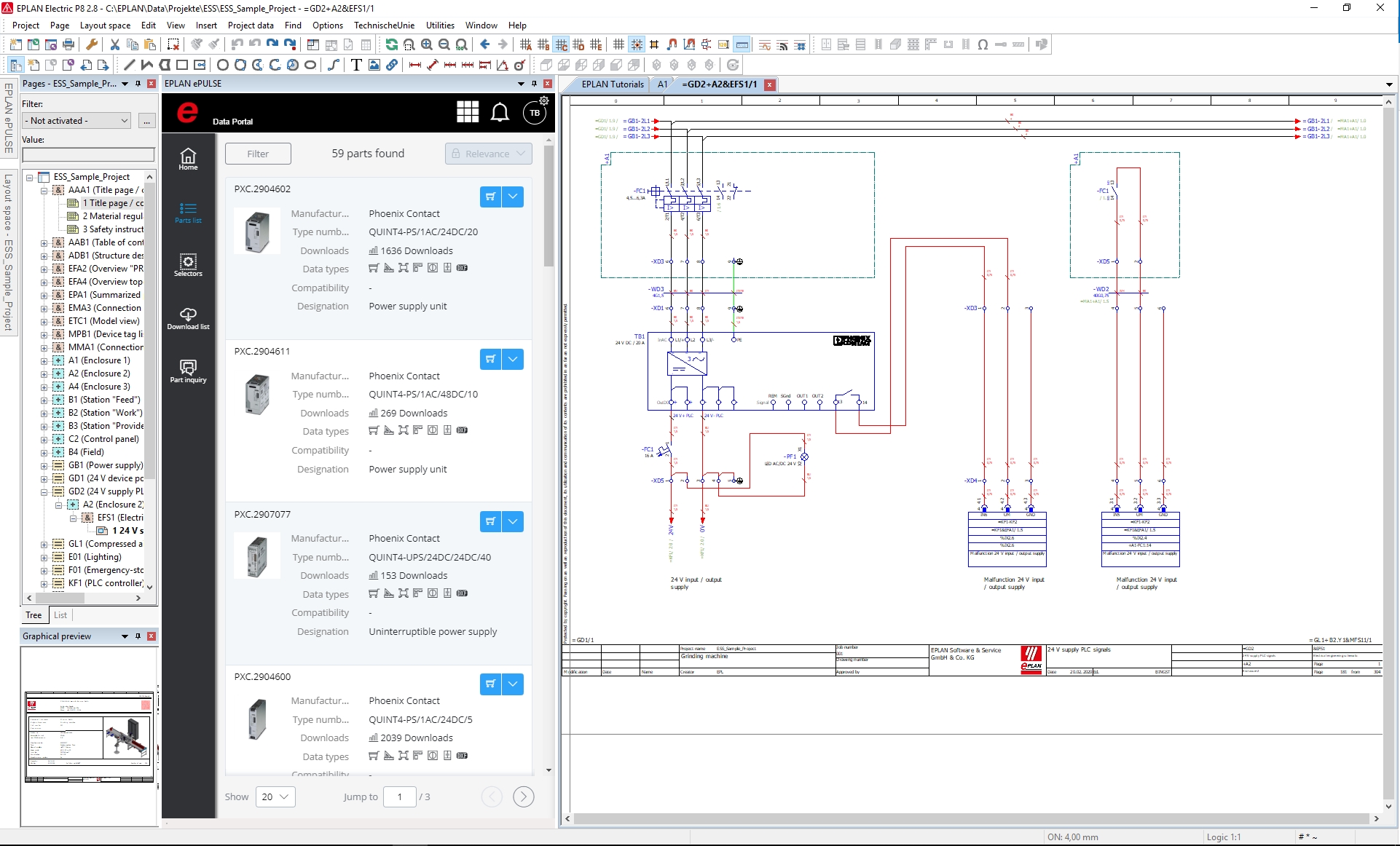 How to correctly import components into parts management

Improve your EPLAN electrical design efficiency with these 5 tips!